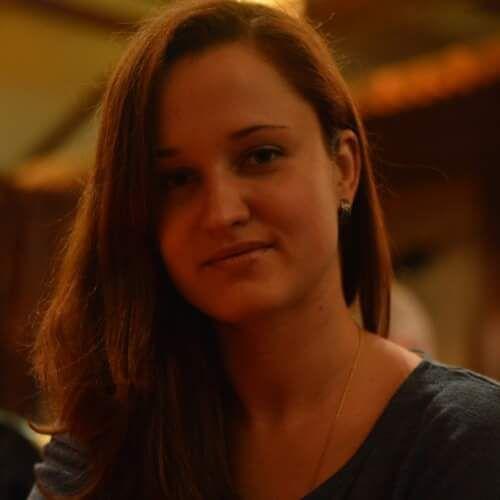 Elena (31 yrs old) lives and works as a project manager in Moscow. Initially growing up in a village in the middle of nowhere she came to know very different sides of Russia. Laughingly she told us that we didn’t experience the “real russia” yet, since we’ve only been to St. Petersburg and Moscow. Back then, when we were still travelling through the freezing russian winter Elena kindly showed us the city until we fled the cold to a cozy Café with views to the Moskwa. Our conversation took place, on January the 4th, 2019. Elena gave us a well-reflected insight of the general environmental awareness in the biggest country on earth. According to her estimation: “very, very many people, they use water without end”. And who would be surprised to hear that: the landscapes of Russia are a hotchpotch of 120.000 rivers, streams and nearly two million lakes – water there is plentyful.

For what purposes did you use water today?

Hm, well of corse I drank water today. And also for the shower, to wash the dishes. Is there something missing? For coffee, I don’t know anything else. Ah yes, and the washing machine.

Do you know where your water comes from?

There is a central system for the city. So, we have a central water station in the houses, that supplies us with water.

How would you describe your water usage?

So I want to say that most inhabitants of Moscow for example (e.g.) use very, very much water. We do not save water. I want to make this very clear. If I turn off the tab whilst brushing my teeth than I think that I am saving water. Because very, very, many people, they use water without end. That’s how it is. (laughs) We need quite a lot of water for the laundry, the dishes and for many, many other things in our daily lifes.

What value does water have to you?

Normally I drink two or two and a half liters of still water every day. That’s why this is the most important thing for me, because if I don’t have water at home or anywhere than it’s really a problem. Without it nothing is possible in our daily lifes. That’s why it is fundamentally important. Allthough e.g. my father, he doesn’t drink water at all. He only drinks tea, coffee or I don’t know, juice or something else. But he does not drink pure water. I don’t know how he lives, but okay (laughing) – such situations.

If you imagine the year 2050 – what do you think the water situation will look like?

When we think a bit about the future, than I want to say that water is a problem. A problem for us on earth – a truly massive issue. Because e.g. in Africa it is the biggest issue already. And in, I don’t know, in Asia, in India. I mean drinking water without any dirt and without various waste from works and factories… And yes here in Russia we have a part of one sixth of the earth. That’s why we don’t think about water at all, that we should save it or something like that. So because of that, in ten years this can become a problem for the whole population on earth. Of corse we do have certein problems with oil and metalls, natural ressources. And the problem of the future will surely be water, in any case. That is very, very clear to me.

What we are doing with our country and with our planet, it’s horrible. And surely we’ll notice some consequences from our doings. And water, that may be one of them.

Can you drink water from the tab at home?

No, in the cities we don’t drink water from the tab. Noone has tried it, but there are some tests and some people claim that it is no problem and you can drink this water. But I don’t want to, in any case.

The most people have certein filters at home, they are connected with the social system. There are two tabs. One is e.g. to clean the dishes, the second one for drinking. But this second one is connected with a filter. Or: we have filters that you need to change, e.g. once per month. Depending on the city.

And e.g. my parents, they live 500 km from Moscow in a village. There I can drink the water – 30 years ago and still today. Of corse, it is not totally healthy, but in any case without these chemical elements that are harmful for your overall health. That’s the situation. Somewhere in the villages in the countryside, far off from any big metropolis, where there is no production, no works or factories, e.g. in the acricultural parts of this country there it is no problem. That is my experience.

If you think about the future, what do you think needs to happen to improve the water situation a little or to prevent it from getting so bad?

Every problem here is connected with other problems. That is a complex. And you cannot solve one problem without solving another one. That means we should find e.g. some other ways for energy and thus find some solutions for our other problems. Maybe we stop this situation about climate change. Maybe it helps us to solve the problems with water. In each case, it is a chain of actions. Because of the warmth the ice is melting and we’re getting more and more water. It is not water with salt like seawater, but water for drinking. It is always a complex. That’s why, if we think about how to solve it, maybe there’ll come up another solution later on.

(laughing) Every problem solving begins with one human. That means, if I try to solve the problem and everyone thinks that way, that maybe we can all try together to do something and it might work. But if we think some bystander will do it – not me, not you, not all the other people – but somewhere else someone will do it or the government – that won’t work. In any case we need to think about this situation and understand that even though today everything is fine, what about tomorrow? What do we have for our children? Or for other people?

The contact with Elena was still established in Hannover via the distant work relation of a neighbour – she works as a project manager of the moscow representation of the “Deutsche Managementakademie Niedersachsen”, which is the reason for her excellent german (the original conversation took place in german language, this is a translation from the abriged version). Elena is married and has no children.

Below is a document attached with the unabriged german version of the interview, containing every giggle, pause and sputter – even though you probably can’t understand a word of it in german, know that it’s out there. ;-)