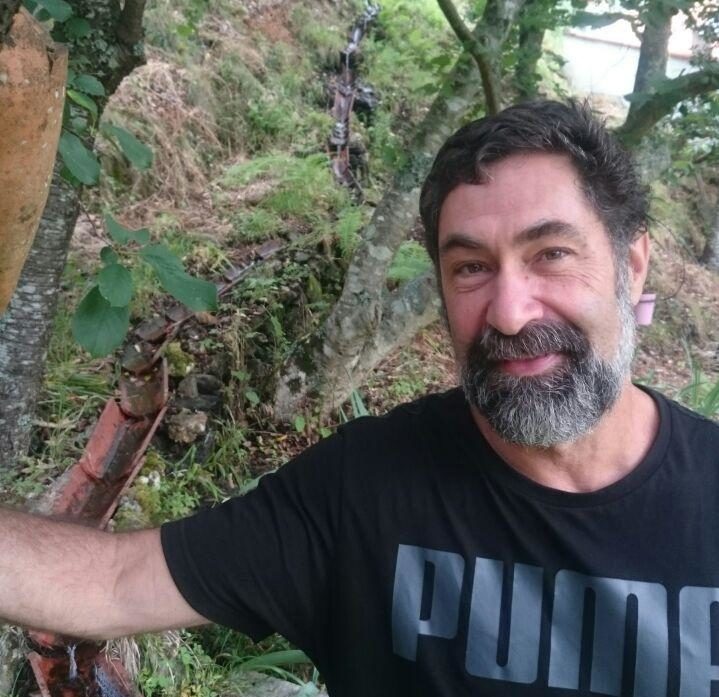 Paulo from the mountains of Portugal

Today we have a guest editorial for you which just came in from Portugal. Johanna and Paula, both 15 years old, have spent 4 weeks of their summer break with their parents in Portugal. While travelling around they got to know Paulo, who they interviewed about a water source in his garden. Thank you for sharing!

Paulo rented the main house on his farm Casa dos medronheiros out to us. A small farm underneath the village of Cepos in the mountains of Portugal. We wanted to enjoy the nature, silence and relaxation after a week in Lisbon. Turns out Paulo‘s farm is the ideal place to do just that. He lives there in the summer for six months and the last six months on the Azores. When the wildfires destroyed the area two years ago his house was spared. He talks about a miracle. The house next door burnt down, the woods around the farm recover slowly, the burnt trees everywhere show Paulo‘s luck.

Not only the mountain and the valley belong to your farm, a water source is also a part of your property. Paulo, you are an anthropologist, and you worked for the local museum. Do you have an assumption, when the water source and the whole construction were built?
It is impossible to know when the complex irrigation system was built which, from a small stream, crosses the whole valley under the ground, with springs and irrigation tanks. It is known, however, that this technique was introduced in the region by the Romans. Later it was expanded and improved by the Arabs.

The water flows into a river with a bathing spot. The river is public. Does that water also belong to you? Can you utilise it as you wish?
Water in Portugal is public – as is access to rivers – and this use is regulated by the government through Water Basin Management Committees. Although each farmer is, according to tradition, entitled to a certain number of hours to water per week, he cannot exercise this right in a way that harms the rest of the community. However, often the state is the first offender, using this water for transfers or megalomaniac projects.

What meaning does the water source have to you? And what did you use the water for in the 20 years of you owning the farm?
The water is precious and the mountains, with their sources, are the maternities where this resource born. I tried to use water in the garden and at home consciously and responsibly. I also tried to enhance all the beauty and harmony water contains.

Is the water drinkable and is it enough for the watering of the farm?
Yes, the water is drinkable and very tasty. Today it is more than enough for farm spending… However, if the surrounding land were all cultivated, as in the old days, it would certainly be insufficient for everyone.

How did you realise the climate change, and did something change at Casa dos Medronheiros? If yes, what changed?
Climate change brought great fires and these fires, destroying the traditional vegetation cover, caused a terrible erosion and led to a decrease in the flow of the mountain’s sources and streams. Casa dos Medronheiros seeks to combat this process of desertification by clearing the bush and planting traditional trees, much more resistant to fires.